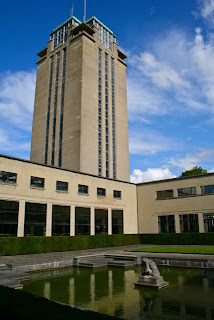 Towering atop Gent's Blandijnberg ("The Hill of Blandijn"), the 64 metre tall, 24 story Boekentoren ("Book Tower"), housing the Gent university library, is surely one of the most remarkable library buildings in the world. Devised in 1933 by Henry Van de Velde (1863 - 1957), as part of a new complex including the library and the institutes for Art History, Pharmaceutical, and Veterinary sciences, it was the Antwerpen native's first public commission in Belgium. An established architect, decorator, industrial designer, painter, and — along with Paul Hankar (1859 - 1901) and Victor Horta (1861 - 1947) — one of the leading proponents of Art Nouveau in Belgium, Van de Velde was a professor at the Gent university at the time, having previously mostly worked in Germany.

The site chosen for the new complex, atop the Blandijnberg, had been settled since Roman times, and would allow the tower to not only dominate the city's skyline, but complement its three "classic" towers — those of the belfry, the St. Bavo Cathedral, and the church of St. Nicholas — which made Gent renowned as the "medieval Manhattan". A fourth tower could've been added in the 16th century, had the megalomaniacal project to make the tower of St. Michael's church the tallest in the land not been aborted by religious wars. Van de Velde saw a chance to not only obscure St. Michael's stump of a tower, but add a structure on the highest ground in the city that would stand not only as a symbol of the university, but also as a beacon of science, wisdom, and knowledge.

However, the university's librarians and administrators were less than taken with the idea, commissioning an alternative, conventional building plan from architect Armand Cerulus (1896 - 1963). Yet Van de Velde managed to get his way, and construction of the tower began in 1936, with structural work and most of the façade finished three years later. To emphasise the building's modern nature, Van de Velde chose to erect a tower of reinforced concrete, relying in particular on the skills of colleague Gustave Magnel (1889 - 1955), the main proponent of prestressed concrete in Belgium. His Laboratorium Magnel vor Betononderzoek (Labo Magnel), dedicated to researching concrete and concrete structures, had been part of the Gent university since 1930. (Magnel also designed the first prestressed concrete bridge in North America, the Walnut Lane Memorial Bridge in Philadelphia.) 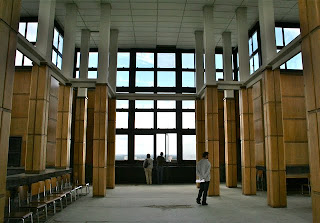 Then economic crisis and world war prevented completion of the project, forcing some materials to be replaced with cheaper or more readily available alternatives; Congolese Rosewood and marble replaced the metals, linoleum, and rubber consumed by the war. And although, at Van de Velde's insistence, 1% of the total building cost was dedicated to decoration, only Karel Aubroeck's sculpture De Runenleester ("The Rune Reader") and Jozef Cantré's relief were delivered, while commissions by leading Flemish expressionists Gustave de Smet (1877 - 1943), Constant Permeke (1886 - 1952) and Frits Van den Berghe (1883 - 1939) were unfulfilled. Quite unwittingly, Van de Velde's tower, crowned with an impressive belvedere, also provided German forces with a most excellent surveillance post during their four-year occupation of Gent.

Surviving the war unscathed, the structure remains a splendid example of Van de Velde's modernism, as well as one of the primary examples of interbellum modernism in Belgium, the structure's curved lines, rounded corners and edges perhaps being his most obvious signature. But he also had a hand in creating its black iron window frames, floor patterns, doorhandles, furniture, even radiator covers. Modernist principles guided the design, with — for instance — incidence of light determining the position of reading rooms; the main and the periodical reading rooms faced south and received the most exposure, while the manuscript room faced north, remaining shielded from light.

Home to a unique collection some 48 km long (or nearly 3 million volumes, using Library of Congress classification — though in one librarian's words "not systematically"), the Boekentoren is due to undergo long overdue restoration, the urgent need for which has been recognised for at least the past 25 years. Limited space and inadequate climate conditions have rendered it unsuitable as a repository for its vulnerable and irreplaceable collection, dating back beyond the founding of Gent's first university library in 1819. Not to forget that it also fails in providing a healthy work environment for its 72 employees (62% of whom were women, with an average age of 41 in 2008) and numerous patrons. 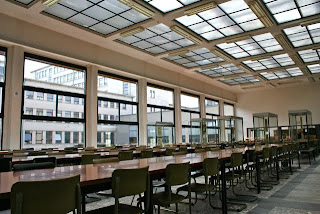 In 2005, the university board invested € 30 million (≈ C$ 42.5 million in '05) in the restoration project, though to reach the 2003 estimate of € 41 million (≈ C$ 63 million in '03) individual sponsors were invited to purchase each of the 23 million cm² of the Boekentoren's façade at a rate of € 1 per cm², or one of 352 steps in its staircase for € 250 (≈ C$ 354 in '05) per step. During the restoration, scheduled to take place between 2013 and 2019, the most sensitive parts of the library's collection will be housed in a brand new underground repository, to be constructed beneath the library courtyard between 2011 and 2013. The repository is intended to continue providing a space for storing parts of the collection in optimal conditions even after the main restoration is completed, its three air conditioned floors — the lowest equipped with a sprung floor and doubly high shelves — containing some 40 km of compact book shelves. 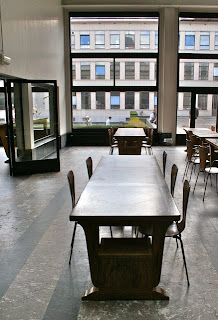 What makes the Gent university library's collection unique is its origin in collections of various local abbeys, churches, and monasteries abolished in the wake of the French Revolution, as well as the rapacious expansion undertaken until the First World War, adding private collections and archives, numismatic collections, posters, prints, engravings, and ephemera. Whether storing the sensitive materials underground, while retaining the lending collection in the tower, will change the level of access remains to be seen. Though currently anyone can register as a patron, only librarians and staff have access to the tower (what in library parlance is referred to as "closed stacks"), with requested materials being delivered in small metal baskets by a paternoster.

When the original construction ended in 1942, it left Henry Van de Velde dissatisfied; the finished result clashing with his desire for unity in design as well as materials. It was also considerably smaller, lacking not only some of the original plan's structures (such as the archeological and ethnographical museum) but also many of the minor details he was so keen on (like the specially designed steel furniture). One can only wonder what Van de Velde would've made of the considerable facelift in store for the library, which plans to deposit the majority of its collection in a direction directly opposite of the symbol he helped create — to represent the power of science and the book as a universal medium of communication.

(More images of the Book Tower.)