When passing a door-post, watch as you walk on, inspect as you enter.

It's uncertain where enemies lurk or crouch in a dark corner. 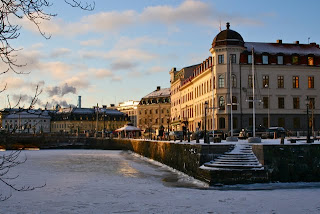 Göteborg (Gothenburg) is a purpose-built city, its current incarnation developed from the Swedish kingdom's fourth and ultimately successful attempt to establish a presence on the North Sea coast. Having clawed possession of the Göta river estuary at Rivö fjord by the middle of the 13th century, the Swedes set about constructing a port to not only make their presence permanent, but also detract trade from the Danish and Norwegian settlements previously dominating the coast. The first Swedish attempts either failed to draw enough visitors, or were so successful the dominant Danes couldn't help but raid and burn them to the ground.

Yet by the time king Gustav II Adolf's Göteborg (as it became known) was completed at the beginning of the 18th century, it was one of the strongest fortified cities in Northern Europe. However, little of its once-impressive fortifications remain, as the winds of war not only shifted away from the city, but also because advances in martial technology and strategy rendered its stationary fortifications obsolete. The majority of the city's defences were torn down at the beginning of the 19th century — leaving only the armoury, Kronhuset (the "Crown's House", one of Göteborg's oldest brick buildings, erected 1643-1655), a single bastion, most of the moat, and two fortified sconces constructed on hills once overlooking the city. 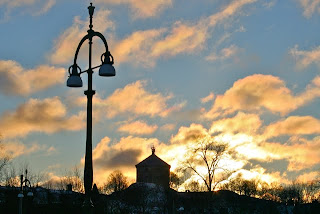 The oldest sconce, Kronan ("the Crown"), erected between 1678 and 1689 on Rysåsen ("Ryd's Hill"), was originally connected to the walled city by a caponier, and has been topped by a gilded copper crown since 1697. Having lost its military importance by the early 19th century, it served first as a prison, later a shelter for the homeless, before being purchased by the city from the state in 1925. For nearly a century, between 1904 and 2004, the sconce housed a military museum (now mothballed) before being turned into a private function hall. As the last Danish attack on Göteborg took place in 1643, before any of the currently remaining defenses were even constructed, neither Kronan or any of the other fortifications were ever tested in battle. 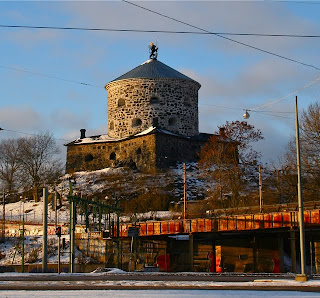 Though the second sconce, Västgöta Lejon (commonly Lejonet, "the Lion"), was begun at the same time as Kronan, it wasn't completed until 1699 — at which point it became apparent that, although built on the strategically important Gullberget ("Gull's Hill"), it could quite easily be bombarded from other nearby hills. Hence, the dud sconce mainly found use as a warehouse for gunpowder made in an adjacent factory. Yet it remained a military installation until 1942, eventually becoming (after restoration work in the early 1970s) the private hall of Götiska Förbundet ("the Geathic Society", a social club of national romantics). The crowned lion brandishing a sword and shield currently crowning the sconce is an 1893 reinterpretation of an earlier original. 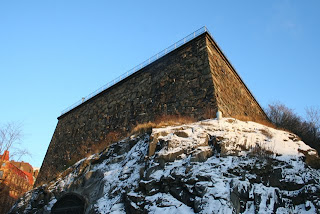 The sole remaining bastion, officially named Carolus XI Rex (the Latin rendition of "King Karl XI") but commonly known as Carolus Rex, is the last standing reminder of the city's once imposing fortified wall, which gradually replaced earlier earthen fortifications. One of thirteen such polygonal bulwarks projecting out from the wall, Carolus Rex wasn't completed until 1731 — over a century after the city's official founder, Gustav II Adolf (1594 – 1632), had (as the story goes) stood on the hill the bastion now occupies, and pointed toward the site where he desired the new city to be constructed. 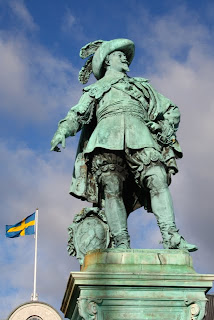 Though a statue supposedly depicting the event has stood in what once was Stora Torget ("the Great Square", now Gustaf Adolfs Torg, "Gustaf Adolf's Square") since 1854, the rapacious monarch founded no fewer then fifteen cities throughout his realm. Hence any sense of distinctness Gothenburgers may derive from their city's origin should be tempered by the fact that statues of Gustav II Adolf can be found in numerous other places, (clearly) equally proud of such royal distinction. Never mind that Göteborg, despite receiving city privileges from its founder as early as 1621, was largely constructed during the reigns of his successors.

However, Gothenburgers are likely unique in continuing to commemorate Gustav II Adolf's demise by stuffing their faces with pastry each November, on the very day the king was killed in the Thirty Years' War. For a while a battle also raged between the city's most prominent confectionary families, the Arnholts and the Bräutigams, as to whom had first devised the infamous pastry, and initiated the tradition. (Having provided Göteborg's inhabitants with marzipan and pastries since 1870, the current, fifth generation of Bräutigams appear to have won through sheer longevity.) 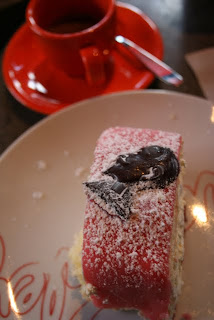 The late 19th century origin of the tradition is now as shrouded in fog as the king himself was said to have been the day he got shot. Nevertheless, the novelty caught on, and by the early 1950s the "Gustav Adolf Pastry" could be bought in 43 Swedish cities and towns each November 6th, in sixteen different varieties in Göteborg alone. Currently the most common incarnation is a variant of the classic Swedish Princess cake, topped with a relief of the king's head in chocolate. Though vaguely macabre, the notion of Göteborg's pastry chefs striking coin from a king's misfortune is largely consistent with the city's tradition of having been founded for militant trade.
Posted by Lech at 3:51 PM