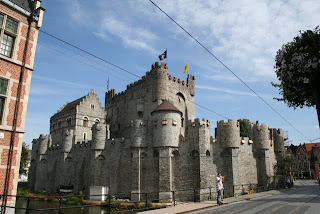 Practically at the centre of Gent stands what for all intents and purposes is a medieval castle: the Gravensteen ("Count's Castle"). The original structure was constructed in 1180, on a site by the river Leie (Lys) that fortified structures had occupied since the 9th century. Yet whether the fairytale building that can be seen and visited here today in any way resembles the original is hotly debated, mainly due to the extensive — some claim "imaginative" — restoration undertaken by the city of Gent in the late 1800s.

Having been constructed by the order of the then Count of Flanders, Philip I (1142 — 1191), the original Gravensteen was modelled on the crusader forts the Count had encountered during the fiasco later known as the Second Crusade. The castle then served as the seat of the Counts of Flanders until formally abandoned in the 14th century, though they rarely spent much time there to begin with, possessing many other castles and houses between which they frequently travelled. 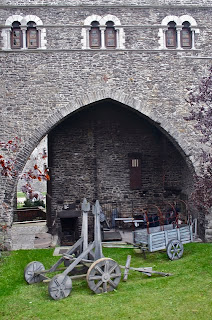 In 1353 the castle housed the city Mint, between 1407 and 1778 the Raad van Vlaanderen (the Council of Flanders, the regions highest legal college) and a prison, before finally being turned into a cotton mill in 1807 — likely the first example of industrial repurposing of any building in Gent. New buildings were erected along the former castle's crumbling walls, parts of which were even recycled as building material for new structures. Inescapably, the decaying Gravensteen became a symbol of abusive power, feudal oppression, horrendous incarceration, and torturous inquisition. 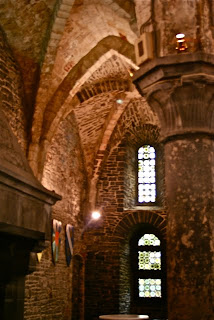 Yet despite calls for its removal, it survived and, beginning in 1894, was subjected to a "romanticizing" restoration, considerably altering the castle to suit 19th century ideas of what the Middle Ages should look like. (Though a decent slice of the real thing can be seen in the torture museum housed in the castle since 2002.) However, as the only remaining medieval castle in Flanders, with a virtually intact defense system, the Gravensteen is among the most visited sites in Gent — if one of the scientifically least examined ones, with no serious archeological research conducted on the structure prior to the 1950s.

The castle is said to have succumbed to invaders only once, in November 1949, when students incensed by the rising price of beer (and the change of policemen's caps from white to blue making them indistinguishable from mailmen and taxi drivers) entered and occupied the Gravensteen. Alas, their siege — now notorious as the Slag om het Gravensteen ("The Battle of the Count's Castle") — proved unfruitful, with prices for the coveted beverages continuing to climb even as the defeated (and presumably quite thirsty) scholars filed out of the Count's old keep. Like so many disillusioned crusaders before them.

(More images of the castle.)