Ten Ragas to a Disco Beat.

The song that the bird sings in the tree

has another tree again in the song that

the bird in the tree sings.

In the tree the song that the bird sings

has again another bird in the song that

in the tree the bird sings. 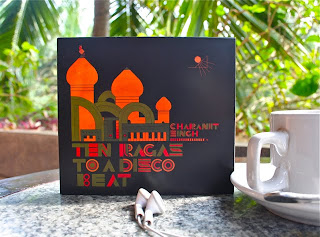 Popular music in India is utterly dominated by the soundtracks spilling out of the nations' various movies factories, whether Bollywood (based in Mumbai (Bombay)), Tollywood (either the Telugu-variety based in Hyderabad, or the Bengali-variety based in Kolkota (Calcutta)), or Kollywood (the Tamil-variety in Chennai (Madras)). As a popular music form, the film songs break down into two main categories: the amalgamation of Indian folklore with imported Western trends preferred by the monied, mainly urban elites (often perceiving themselves as tastemakers), and the pure traditional music preferred by the mostly rural masses. It's a climate in which homegrown innovative pop music is particularly hard to come by, never mind create.

But occasionally even a conservative music scene is capable of producing surprises. That it should come from the talented hands of a maverick the likes of Charanjit Singh should be less surprising. Having spent nearly half a century at the Bollywood musical assembly line, diligently plucking away traditional instruments, Singh was allegedly responsible for promulgating new, imported instruments such as the Clavioline, the Farfisa Transicord, and the bass guitar into the Bollywood mix. Perhaps a childhood spent in his family's Mumbai (Bombay) instrument shop fueled Singh's lifelong curiosity for novel ways of creating sounds.

Whatever the real reason may be, the "throwaway" album he cobbled together over a couple of days in HMV studios toward the end of 1982 — trying to quickly cash in on a trend by performing traditional ragas to a "disco" beat — is truly remarkable. Particularly because of the electronic instruments with which Sing chose to record it. The three devices he carted into the HMV studios — the Roland JUPITER-8 synthesiser, the Roland TR-808 Rhythm Composer (or, plainly, drum machine), and the Roland TB-303 Bass Line — have since become staples of techno (and in particular Acid House) music, varieties of which can nowadays be heard pumping out of clubs around the globe. Rather than displaying an uncanny knack for anticipating future developments, Singh's choices were likely dictated by what was available to him, affordable, and by virtue of being made by the same company, happened to work well together in an era where MIDI and computers were only beginning to appear.

The machines employed are in part what makes Singh's album of electronic ragas so astonishing. On one hand, there's the steady pulsing, at present, "signature" four-on the-floor beat confirming not only the global appeal of dance music but also it's much deeper connection with more primordial forms of dance music (and perhaps, hence, the reason for its renewed and widespread appeal). On the other hand, there's the untreated, practically "raw" sounds of the devices employed, which to contemporary ears sound both "classic" and — in the case of the 303 and 808 in particular — "timeless", ironically because of their ubiquitousness. Not that Singh simply employs the machines' factory presets; he skillfully synthesises traditional Indian instruments, like the santoor, the veena, the shehnai, and the tambura.

The other part that makes Singh's recording extraordinary is the improvisational parts he performs over his preprogrammed backing. An accomplished musician, Singh doesn't merely knock out a series of quick knockoff-ragas; his performance is not only competent, but able to encompass experimentation as well. Particularly in the Bhupali and Meghmalhar ragas, where he brazenly introduces notes not "prescribed" in more traditional renditions of these ragas. Perhaps as a result of the comparative haste the album was recorded in, pretty much all the ten cuts stick to the same tempo, easily giving the impression of a modern techno remix-album, comprising ten variations on a similar theme (which, in essence traditional ragas can crudely be describes as).

There have been suggestions that Singh may have been inspired by the performances in Mumbai (Bombay) by Kraftwerk on their 1981 Computer World Tour, being among the few performances by Western purely electronic pop acts in India at the time. Yet Singh has denied any knowledge of either the German band's performances or any of their music. However, the comparison is a compelling one, as Kraftwerk's music, highly influenced by European classical music and — to lesser extent — folk music, had at this time arrived at a form not dissimilar to Indian ragas: motifs improvised according to specific rules over a set, minimal rhythmical backing. (Incidentally, for their Indian concerts, Kraftwerk were both preceded and succeeded by raga performers, with much of the audience remaining for the entirety of the performances.)

Originally released early in 1983 by EMI's Indian subsidiary, the Gramophone Company of India (also responsible for releasing Kraftwerk's principal recordings in India), Singh's "instrumental disco" ragas were met with critical acclaim, but — as is often the case with pioneering electronic pop records — was far from a commercial success. Since being "rediscovered", quite by chance, by the Dutch Bombay Connection label's Edo Bouman, the renewed interest in Singh's pioneering record has sparked a hunt for original issue vinyl LPs, with the odd copy cropping up on internet bidding sites commanding prices in the thousands of dollars. Luckily, the Bombay Connection's reissue is far more affordable, and available in digital as well as analogue (vinyl) formats, though the new sleeve — designed by Stefan Glerum — not only messes up the running order but also some of the titles.

However, the extensive sleeve notes — which include the original LP "blurb" — compensate somewhat for these errors, and the discs themselves retain the original running order. Whether the belated appreciation among Western audiences will translate to greater recognition for Charanjit Singh's talents remains to be seen. The performer himself meanwhile continues his career, touring with his synthesised One Man Show, performing with other bands, and contributing to Bollywood soundtracks. Among his many recordings, Singh personally considers the "disco" ragas the best, representing something original, of his own making, rather than just performances of other composers music.

Posted by Lech at 4:47 PM No comments: Links to this post

Across the harbour the vertical city of the rich
keeps rising — grotesque heads on unsteady shoulders.
The slum city of asbestos squats at its ankles,
huddled behind a smokestack. - Keki N. Daruwalla, Mandwa 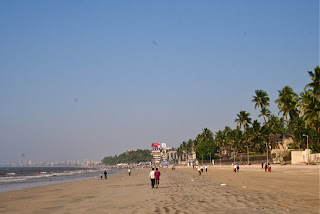 One of the most prominent beaches in Mumbai (Bombay) is the six kilometer stretch parallel to Juhu Tara Road, connecting the uptown suburbs of Old Khar West and Juhu. A favourite spot of local filmmakers, no doubt providing an inexpensive backdrop complete with dramatic sunsets, it's long been the cheapest and most viable destination for family outings to many of the city's nearly fourteen million inhabitants. A recent drive to clean the beach up has resulted in some four kilometers suitable for romantic strolls, if passage can be found among the crowds pouring in by cars and buses, though the beach still remains unsuitable for swimming or sunbathing.

To actually reach the beach one has to brave the incessantly bleating traffic — a seemingly mad flock of birds of every feather teeming hither and yon — which with some practice does begin to make sense after a while. Drivers don't hang on their horn so much in anger as attempt to alert others of their presence, or simply try to dispense helpful suggestions. Once seated at a café, sipping the domestic franchise espresso which appears to be the sole alternative to the otherwise predominant instant coffee, observing starched, uniformed children being delivered home from school by auto rickshaws, it's even possible to forget about the multitudinous peddlers on the beach, the precarious sidewalk, and the various flocks of beasts of burden and bedraggled street-urchins (estimated at 18 million in India) accompanying one along the way.

However, the most direct threat to the beach's integrity is posed by the nearby Juhu Aerodrome, where plans to extend the runway of what is now a parking plot for the helicopters and jets of the rich and famous would claim part of the seafront, jutting out into the Arabian Sea and cutting the beach in half. So far, the extension plans have been denied permission to proceed by the Indian Government's Ministry of Environment and Forests, but in a polity such as India's it can surely only be a question of time before the right palms have been greased up in the required fashion. 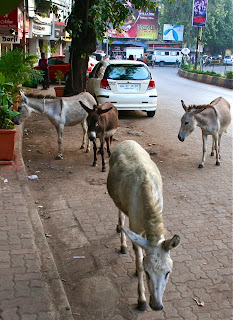 Aviation has been part of the beach's history since 1928, when the Juhu Aerodrome, the closest and oldest of the three airports in the area, first opened. As the flightpath of international travelers takes them across the beach on their way to (or from) the Chhatrapati Shivaji International Airport (known as the Sahar International Airport before Hindu-nationalist fervour overtook the nation), they'll pass over the former main airport of the city, the Santa Cruz Airport (now the main domestic airport), as well as the Juhu strip where the first pilot and two apprentice mechanics of what would one day become Air India were based.

Their original palm-thatched roof hut long since swept away by development, and the desires of the well-heeled and tony, who have flocked to Juhu ever since Jamsetji Tata (1839 - 1904) — the "father of Indian Industry" — bought a plot here back in the 1890s. Perhaps more than any other family, the Tatas have left their indelible mark on Juhu, as it was Jamsetji's first cousin once removed Jehangir Ratanji Dadabhoy Tata (1904 - 1993) who founded Air India's predecessor Tata Airlines in 1932. Increasingly though, Juhu — as well as the Pali Hill neighbourhood in Old Khar along the beach's southern end — has become the preserve of Bollywood stars, industrialists, and assorted "business" wallas seeking refuge from the less affluent inhabitants of the world's second most populous city. 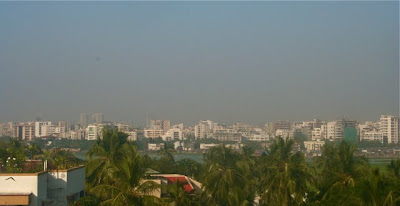 Posted by Lech at 4:15 PM No comments: Links to this post