Better a humble house than none. A man is a master at home.

A pair of goats and a patched roof are better than begging. 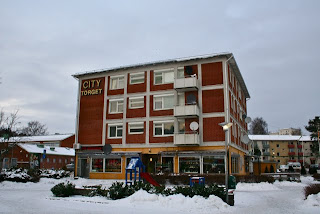 Reminders of Göteborg's (Gothenburg's) purpose-built nature appear both throughout the city and over the course of time, throughout the city's history. Once its fortified walls came down, Göteborg grew in a distinctly planned rather than organic fashion. It easily impresses visitors as a city consisting of a number of small towns tenaciously held together, rather than large municipality — the second largest in Sweden, fifth largest in Scandinavia — with a natural centre. The principal reason for this is that the city has had town plans drawn up (despite the challenging geography of a barren, rocky, hilly archipelago, interspersed with wetlands) at practically every point in its history, with every major style that dominated Swedish architecture — Classicism, National Romanticism, Functionalism, Modernism — leaving indelible marks on the cityscape, and very brief periods of unregulated planning and construction. 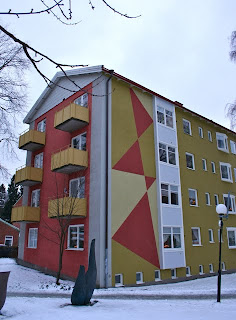 One of the best examples of the practically self-contained "mini-communities" that make up the city of Göteborg is the primarily residential district of Kortedala. Laid out and mainly constructed between 1952-1957 in what until then was a rural area, Kortedala was the second Satellite Town in Sweden (the first being Vällingby northwest of Stockholm) — a smaller metropolitan area established at some distance from and largely independent of a neighbouring larger metropolitan area (similar to Britain's New Towns). The first such district to be created in the Göteborg area, Kortedala (derived from Korta dalen, the "short valley", as opposed to nearby Djupedalen, the "deep" or "lengthy valley") consisted largely of three to four story low-rise buildings, eight to nine story high-rise buildings, and some 300 single family houses, comprising 8,300 flats in total by the early 1960s. Exceptionally few among these were larger than one bedroom flats. 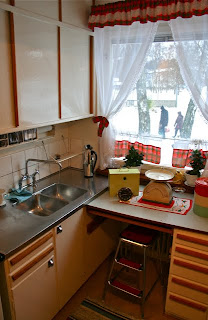 Kortedala's buildings were constructed in eight neighbourhood units around four local squares (one large and three smaller ones), with a streetcar line (opened in 1957) running through the middle of the district, connecting it with central Göteborg. Most of the district's streets received names relating to horological and calendar events, hence the first families moving to the brand new district in November 1953, found themselves living on Kalendervägen ("Calendar Street") and Månadsgatan ('Month Street"). Planned for 21,000 inhabitants, the district peaked at 28,000 in the mid-1960s, and is currently home to some 15,000 people. Built a decade before Sweden implemented its infamous Million Programme, Kortedala has largely managed to maintain its ambitious character of a welfare state's idealised "good homes", with fully equipped kitchens, bathrooms, and hardwood floors available and affordable to every citizen.

Where international delegations once descended to learn how to construct "good-quality" housing areas from scratch — complete with easy access to education, healthcare, shopping, entertainment, and other essential services — the average visitor can now inspect a two room flat restored to its original, mid-1950s-state at the Kortedala Museum. Housed in a standard 65 m² (≈ 700 Sq Ft) flat, carefully restored with original paints, wallpaper, and period-style furnishings, the museum offers a glimpse of what comfortable, modern living SEK 165/month (roughly C$ 31.85 in 1965, the equivalent of C$ 217 in 2009) could rent in Sweden 55 years ago. It's an opportunity to literally step back half a century to the point in time when the Swedish welfare society — the project which for a brief period provided worldwide renown to this otherwise quite parochial nation on the outskirts of Europe — began taking shape, and the dream of a place of one's own (with indoor plumbing) became a reality for an increasing number of Swedes. 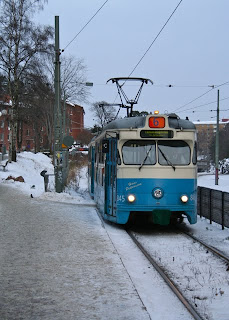 Run by volunteers, who are on hand to share their own memories of growing up and living in the district, the tiny time capsule opens up practically every Sunday of the year to display its exhibits of an optimistic post-war decade, when the future seemed brighter for the typical family of five (two adults and their three children) that would've inhabited a flat such as this one. The majority had moved to Göteborg following the Second World War, primarily seeking employment in industry, and most had been relegated to the city's 30,000 one-room flats (barely 200 of which had indoor plumbing). Yet the Kortedala museum-flat isn't merely an artifact of a time when "common people" began to afford decent housing with essential amenities close by, but also "luxury" goods like record players, televisions, even holidays abroad — evident from some of the kitschy, "exotic" bric-a-brac strewn about the place. It's also a unique testament to a time when Swedish politicians still had the audacity to envision a decent standard of living for all their citizens, to elevate the poorest above the sordid squalor of industrial slums. Kortedala remains a reminder of a time when it still seemed possible to create an ideal society according to a master plan.

(More images of the museum-flat here.)